From a personal perspective, this year’s Norwescon was probably the most complete and rewarding convention I’ve ever been to. Over the course of four days, I switched between the roles of writer, cosplayer, and photographer. I hung out with old friends, met new ones, mingled with professional authors, and hung out far too late at room parties. If there is a “platonic ideal” of conventions, this year’s Norwescon came as close as I’ve ever seen.

The few days leading up to Norwescon were a little stressful, as my hotel room got cancelled without notice (my roommate’s fault, not the hotel’s) and I had to scramble a bit. Luckily I found a room with my old roommate from last year, and after some last-minute rushing to get cosplay stuff together, I arrived on Thursday only a little later than planned. And Thursday night kicked off quite well, with Fairwood Press hosting a small press publishing party in the Presidential Suite.

Friday was my day for going nuts with cosplay, so I painted myself solid black and went as a drow, i.e. dark elf. (As seen below with fellow Wordslinger Andrew Rosenberg.) I had wanted to wear this costume at Dragon*Con last year, but the TSA tried to steal my airbrush.

Speaking of which, airbrushes are kind of a pain to lug to cons. If you forget a part (which I did), you’re screwed, unless you can jury-rig it (which I did). The airbrush makeup is comfortable, doesn’t rub off much, and goes on fast, but next time I may try sponge makeup.

I haven’t done much cosplaying until now, but this was the most complete costume I’ve ever done, as well as my favorite. I even picked up a hat and a cane in the dealers’ room to go along with it.

I’m not sure exactly what appeals to me about cosplay. Partly I think it’s the just fun to spend a little while as someone, or something, else. It’s also a bit of a personal challenge– I usually like to blend in with the crowd, but when you’re cosplaying, you’re inherently calling attention to yourself. Admittedly, cosplaying at a convention is not exactly out of the norm, but this costume would blend in more at, say, 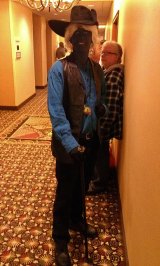 Dragon*Con, than Norwescon, where most costumes tend to lean toward goth or steampunk.

So it was fun, and I plan to do it again. At the risk of losing several Man Points, I’ll admit that I like putting outfits, makeup effects, and characters together. Maybe I’ll even use one as the inspiration for a story– which I estimate would earn about 200 Nerd Points, redeemable for luggage or a Doctor Who prize pack.

Saturday was Serious Writer Day for me, although I did keep the hat and the cane, because they were awesome. I had my lunch with my writing group, the Cloud City Wordslingers, and that afternoon I had a short story critiqued at the Fairwood Writers Workshop. This was a round-robin session where several pro authors, including one of my personal writing heroes, Jay Lake, gave me feedback on a short story. It was a really useful and fun exercise– this is the second writing workshop I’ve done at a con, and I plan to keep doing them.

As it turns out, two of the pros really liked my story and the third tore it apart. But that’s how these things go– taste and advice are often subjective, even among writers who know what they’re doing.

The other cool part about the Writers Workshop was the Saturday afternoon social, in which we got to mingle and chat with the other workshop participants. It was great for meeting folks, making friends, and comparing notes.

Also, on Saturday, they announced the nominees for this year’s Hugo and Campbell Awards– congratulations to everyone on the list! Later that night, at the DAW Books Party, I was able to congratulate several of the nominees in person, including Stina Leicht (Campbell Award) and Mary Robinette Kowal (Best Novella; Best Related Work).

As the DAW Party wound down, a few of us made our way back over to the far wing of the hotel, where several room parties were in full swing, many complete with open bars and dance floors. I still had half a bottle of Scotch left over from the Rainforest Writers Village, and with the help of a few friends, we drank the rest of it, and danced, chatted, and generally had an awesome time until the wee hours of the morning.

For thirty years, I have avoided having a hangover. Partly by not going to a lot of parties, but partly also by being smart and drinking lots of water on the few-and-far-between occasions when I have gotten plastered. Not so this time. I woke up on Sunday morning feeling pretty horrific. Nevertheless, I dragged myself out of bed and stumbled my way to a string of Sunday morning panels and readings, the highlight of which (and the last thing on my agenda) was a reading by local author Amy Thomson. (Amy Thomson is the author of “The Color of Distance,” which is possibly my favorite science fiction novel ever– and that’s saying a lot.) She read from a story called Buddha Nature, which will be appearing in Analog in a few months. Keep an eye out for it.

So all in all, a completely awesome con.

I’ll close it off with a quick list of positives and negatives (or to use Norwescon terminology, roses and onions):

Rose: Photography. This year I knew about the Masquerade Photo Area, and took advantage of it. I spent about three hours on Saturday evening taking pictures of cosplayers. Fun times. To anyone I offended while muttering obscenities at my camera for recharging the flash too slowly, I apologize. Full set of Norwescon pics here.

Onion: Name Badges. The names on the con badges were too small to read from further than about two feet away, which meant you pretty much had to lean forward and squint to read anybody’s. Kind of defeats the purpose (namely, so you don’t have to admit that you’ve forgotten someone’s name thirty seconds after they introduce themselves).

Rose: Dealer’s Room. Norwescon has my favorite dealer’s room of any con, including Dragon*Con. Maybe it’s because I can buy cosplaying stuff for males beyond just steampunk garb. Or maybe it’s the general diversity of the dealers, or how friendly and willing to chat they are. But I like the dealer’s room.

Onion: Panels. This is a personal one for me: I didn’t attend many panels. Partly because Norwescon was more of a social con for me this year (which was awesome), but I was also a little reluctant to hit up the writing panels. I’ve mentioned this before, but once you go to enough cons, the panels start getting repetitive. You reach a point where you know it all (in theory, if not practice).

Maybe soon I’ll make a few more sales and can sit on the other side of the table. Or maybe I should branch out on the panels– Norwescon has some fantastic science panels, touching on everything from space to biology to nanotech, which I think could serve as fertile grounds for story ideas. I just didn’t get a chance. Ah, well. There’s always next year.

Rose: Meeting So Many Awesome People. Again, kind of a personal one. But until now, I haven’t had much luck meeting new people at cons– partly due to my own shyness, partly because geeks tend to be clique-ish by nature. This year was different: Emily, Steve, Josh, y’all are awesome. As are the folks I met (or re-met) at the Writers’ Workshop: Mae, Tinnara, Jeff, Rebecca, and I know I’m leaving some folks out– my apologies. Thanks, everyone, for an amazing con.

Onion: SakuraCon. It’s an old gripe, but I’d be remiss if I didn’t say it. It’s a ten-minute walk from my apartment, and I’d love to check it out one year. But as long as it and Norwescon are the same weekend, Norwescon will win every time.

Rose: Room Parties with Open Bars. Enough said. And thanks, party-hosting-folks, for helping make Norwescon what it is.

Onion: Room Parties with Jabba the Hutt. He kicked us out. Come on, the door was open. How were we supposed to know it was private?

At least we didn’t get fed to the rancor.

Rose: Single Malt Scotch. That is some pretty awesome stuff.

Onion: Single Malt Scotch. But holy shit, it will f**k you up in the morning.

2 thoughts on “Norwescon: Best Con, or Best Con Ever?”