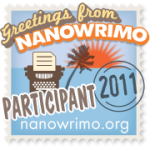 Well, it’s almost that time of year again: November, aka National Novel Writing Month. For the third time, I’ll be endeavoring to write 50,000 words, hopefully in a manner that resembles a single coherent story. 2009 was successful; 2010 (which was actually a continuation of my 2009 story) wasn’t. However, that story (my epic fantasy, In a Land of Wind and Sky) now has a completed 177,000 word rough draft, which means this November it’s time for something new.

When I planned In a Land of Wind and Sky, I started with a basic idea for a plot, then came up with characters who could play the roles in that plot, and then came up with a setting in which that plot could play out. So essentially, I built the novel in order of plot, character, setting. In retrospect, I may have done things backward– if I had done more worldbuilding first, and let the characters be born from that setting, it might have felt more natural to me. Instead, it often felt like I was crafting a world to match what the plot needed, and for some reason that felt like cheating to me. In my head, the world felt less real because too often I was trying to finagle things to match what the plot needed.

This time, I’m not actually starting with a single idea or plot point as inspiration. Instead, I’m starting with a general concept that seems kind of cool. So far, it’s shaping up to be sort of like Sliders meets Ocean’s Eleven in an Urban Fantasy setting.

After writing a very complicated plot, with several intertwined character arcs, with In a Land of Wind and Sky, I decided I wanted to write something simpler and more straightforward. My idea was to write it in first person, and setting it in the contemporary world in order to minimize the amount of worldbuilding I needed to do. Immediately, I thought “urban fantasy.” Plus, I’ve read a lot of urban fantasy in the past year (most notably the entire “Dresden Files” series), and something along those lines seemed like it might play to my strengths, as well as be fun to write.

With that thought, I began to let my mind wander, and began building a world and magic system. That in turns suggested possible character quirks and backstories to me; in addition, I found characters from a couple of stalled short stories years ago who fit nicely into this new world. I’m still looking for the plot, but I do see a lot of possibilities, and as I flesh out the magic and the characters more, I’m letting those be the guide for my muse. So in essence, I’m building this novel backwards from how I built my first one: this time I’m going setting, character, plot. It’s a little more touch-and-go, and I feel like there’s still a risk that I may tear up the whole thing in frustration, but if I can get it working, I think the novel will come together more naturally than my first one. Of course, I already have ten characters just on the good guys’ side… and I’m pretty sure I’m gonna have to write it in third person… so it’s probably going to end up more complicated than I originally planned… oh, well.

But even if I finish planning this novel and come up with a plot that inspires me, that doesn’t mean that I’ll be successful at NaNoWriMo. I’m on course to start a new full-time job on November 3rd, after a summer of fun-yet-increasingly-broke writing and travel. It remains to be seen how the new job’s going to affect my writing time– since I usually do my writing in two-hour evening spurts at Bauhaus Coffee, my hope is that it won’t affect my writing life too much.

It’s been a crazy past few months. I’ve done the Clarion West Write-a-thon, finished the first draft of a novel, written four short stories, and gone to three weekend conventions. In non-writing stuff, I’ve driven the North Cascades Loop, hiked in Glacier and Yellowstone National Parks, spent a weekend at Mt. Baker, and conducted and finished a job search. It’s been a productive four months– unfortunately, not the sort of productivity that anyone is paying me for yet. So it’s back to cubicle world for a while, starting right around the time NaNoWriMo begins.

2 thoughts on “A Pre-NaNoWriMo Retrospective”