My novel (working title: “In a Land of Wind and Sky”) has gone through a series of fitful starts and stops over the past few months. My muse has been sidetracked by various short stories that I’ve been writing instead, but the novel stays stuck in my head, poking at me occasionally, like an itch that just won’t go away. I’ve done a great deal of editing on it, sending the first few chapters through writing groups, fine-tuning battle scenes and character voices and mixing in various flavors of awesome, but I haven’t gotten much new writing done on it.

But now in the past week I’ve written two new pieces of it in 1,000+ word spurts, because all the editing in the world, fun as it is, isn’t going to actually finish this thing.

So I’m setting myself a goal, here and now, of completing the whole first draft before the next NaNoWriMo. It’s time to face facts: this thing is going to be stuck in my head until I get it out on paper, so I’d best do it as soon as I can, even if the form is a little rough. (For you non-authors, it’s like having a song stuck in your head, except in this case it’s an entire novel, and instead of two lines of lyrics on endless repeat, it’s a myriad of characters and plot ideas yammering at you, interrupting each other, and just generally being a pain in the cranium.)

I’ve passed the 200-page mark (about 62,000 words), but there’s a long way to go. If I can do just 5,000 words a week I can make it to 160,000 words by the first of November. Will that be enough to finish the first draft? I don’t know yet, but it’s worth a shot. Because I don’t know how I’m going to be able to write a second novel in November with this one still pestering me.

In case it sound like I’m being overly negative, don’t get me wrong– I’m thrilled to have a novel stuck in my head. It means the ending is good enough that I can’t ignore it, like I’ve done with several other concepts that still occasionally rattle around in my subconscious. It means this story may yet be finished. 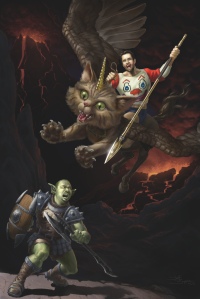 I have, however, let myself get distracted by one thing: sci-fi author John Scalzi and former Star Trek actor Wil Wheaton are holding a fanfiction contest in which the goal is to describe what on earth is going in the picture on the right. (Yes, that is Wil Wheaton is a clown sweater, riding a unicorn-pegasus-kitten as he attacks an orcish version of John Scalzi. A Scalzorc, as it were.)

The winner gets paid for their story at ten cents a word, and published along with several other authors in a book whose proceeds go to benefit the Lupus Foundation. Whether I win or not, I figure it’s good practice for writing a pre-set theme, and besides, it’s not every day you get to write unicorn-pegasus-kitten fanfiction.

One thought on “The Little Novel That Could”