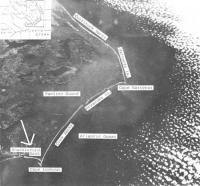 Two weeks ago I dusted off my backpacking gear, which has sat unused for over a year, and went backpacking on Shackleford Banks, a little island on the southern edge of North Carolina’s Outer Banks. It’s only about nine miles long by half a mile wide (if that), but it’s a cool little island.

Among other things, the island is home to a population of about 130 wild horses. No one knows exactly how they got there, although one of the more popular tales is that they’re descended from horses that survived a Spanish shipwreck, back in the 1600s or earlier.

The plan was to get ferried across to the island, hike along the beach a mile or so, then set up camp and spent the rest of the day exploring. That part went pretty much according to plan; it was a beautiful day, and the temperature was in the 50s. Pretty nice, considering just a couple weeks before we had a really bad cold snap that sent temperatures into the twenties and teens. So we set up camp behind the dunes, in a nice flat area of scrub brush, and set off down the beach.

The beach was almost empty, except for a few fishermen casting their lines from shore, and even they disappeared as we walked further down the island. My favorite part of the whole trip may have been the massive number of sea shells that littered the beach; there were piles of them freshly washed up, and more conch shells than I’ve ever seen. Most of those were broken, although even the broken ones were pretty in their own artistic-looking ways. Inland from the beach, separated from the pounding surf by a line of high dunes, little patches of forest and scrub brush were able to grow. We saw plenty of wild horses roaming here, and as it got late and we began to make our way back to camp, there were dolphins jumping twenty or three feet offshore, seemingly entire pods of them moving down the coastline and accompanying us the whole way back.

Things got more interesting during the night. Rain was expected, but we were prepared for it; what we weren’t prepared for was to wake up the next morning and find that a storm was incoming, with possible lightning and wind gusts of up to 45 miles an hour. Needless to say, it was a long morning; about half the tents didn’t stay up in the wind, and of those that did stay up, at least one had to be moved when about two-thirds of our campsite slowly transformed into marshland. Luckily, this was all around 9 or 10 am, so it was light and we were pretty well awake. My tent is an ultralight tent, and was one of the ones that didn’t survive, so I put on warm clothes, my rain gear and went for a walk. Heading inland, we found a nice area behind some trees that was pretty well sheltered from the wind. In retrospect, it would have made a nice campsite.

Finally, the rain stopped, and not long after, the sky cleared. We had a sunny walk back to the ferry point, where we were picked up about noon, and after lunch in Morehead City, headed home…the trip was sandy and wet, but fun.

I like getting away from civilization, and I don’t mean little day hikes into a patch of forest in the middle of the city (although those can be nice, too). I mean backpacking in and setting up camp, someplace where you can actually see the stars at night (we probably would have been able to on this trip, if not for the rain), and where you’re really out away from civilization and amidst nature. It’s a great way to focus your mind on something different and get a release from the mundanity of day-to-day work (which has been threatening to overwhelm me lately… stupid deadlines). I’ll definitely be doing more of this in the near future.

2 thoughts on “Getting my Feet Wet”